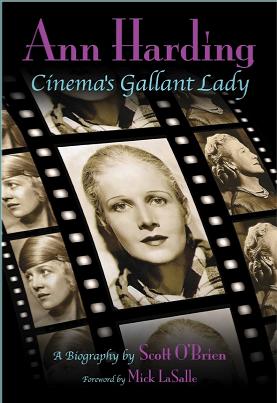 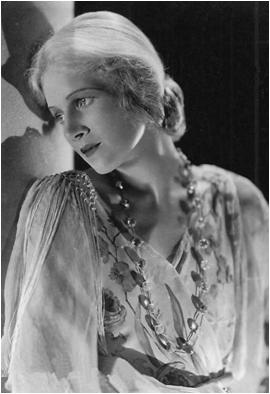 For an overview of Ann's life and career read the following Turner Classic Movie blog interview:

With the publication earlier this year of Scott O'Brien's beautifully illustrated and well written biography, a balanced portrait of a skilled actress emerges, as well as some sense of the publicly guarded but privately intense woman behind her fame. Recently, I had a chance to ask the author of this meticulously researched and long overdue biography of Ann Harding about his interest in this unique, transitional figure in American film. Perhaps after reading this post a few more people who have yet to discover her work will pause next time one of her rarely seen films, such as Devotion (1931), The Animal Kingdom (1932), Double Harness (1933), When Ladies Meet (1933), The Flame Within (1935) or Peter Ibbetson (1935) emerges from the movie vault. This often surprisingly modern actress may intrigue and touch you with her presence. You might find yourself unexpectedly enthralled. 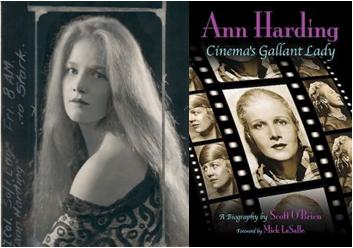 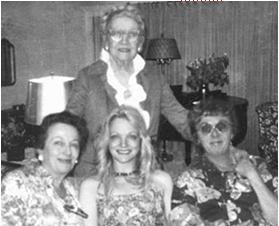 I am more than happy to recall events in my childhood in relationship with my aunt Dody, better known as Ann Harding. First, I want to take this opportunity to thank you for your outstanding book, in which you documented her meteoric rise to stardom in the thirties, and the balance of her career and life.

My family moved from New York to California in 1930, at her invitation so my father could manage her finances. It was a momentous time for my sister Barbara and me. The train trip, all the sights and sounds, the extraordinary differences of the East Coast vs. the West. For me it was a chance to see my little cousin, Jane, but most of all, my aunt for whom I was named and my Godmother.

The days at my aunt's home were a delight, playing with Jane, swimming and wandering about the hillside. When I lived with her and Jane for a time, my aunt invited Bonita Granville to come swim with Jane and me every day. Bonita was about my age and a lovely chum, and she showed me how to dive off the diving board which was a big event for me. Although Aunt Dody was gone most of the day, as soon as she'd come home, we'd all gather in the living room to talk over the events of the day. At all times she was interested in what had happened, and was very loving with us.

My fondest memories of Aunt Dody are small things, really. Watching her brush her hair and then twist it into that bun was an astonishing sight. She was so fast at it, I could hardly believe my eyes. After she'd wash her hair, she'd sit out on the patio and read while the sun dried it. Another favorite memory of mine is how she'd tuck herself away in her small den downstairs. There was a piano and a chair with a writing desk where she spent some of her free hours writing. She also enjoyed playing the piano, gardening, swimming, tennis and crocheting.

I think that my aunt's first love was music. By the age of two, she'd learned to play a song on the piano my grandmother had written for the girls. Aunt Dody sang Gilbert and Sullivan songs while she was crocheting-she taught me several of them, and how to harmonize, and we'd have the most fun singing Chippy-chippy-chopper-on-a-big-black-block. She had a wonderful sound system-music played throughout the entire house. The record player was right behind the piano in a little cabinet built into the wall. We listened to the radio, too, but mostly records-Beethoven, Mozart, Bach, Wagner. She gave me several books on music, and her greatest gift to me was the appreciation of it.

I was almost in my aunt's movie, Westward Passage, in the role as her daughter. Costumes had been made, and the first day of filming was upon us-but the weather was terrible, holding up the production. Sir Lawrence Olivier was the dearest man, and even danced with me as we waited for the weather to clear, but it never did. The next day Aunt Dody came home and called me into the living room. She sat next to me on the couch, and tenderly let me know that I wouldn't be in the movie after all. The mother of a young actress had complained of nepotism. The silver lining was that my chum, Bonita got the role, and that took the sting out of it.

My favorite movies were Biography of a Bachelor Girl, and Peter Ibbetson. I loved them for different reasons. In Biography of a Bachelor Girl, it was fun to see Aunt Dody's comical side, which we always saw at home. She was so funny she'd have all of us in stitches-- Jane, Fong, the butler, and me. Peter Ibbetson is such a beautiful story, and the especially wonderful spark in her eyes that I recall so dearly, is eminently present.

Recalling the words my mother wrote of her sister's devotion to her art-that she was essentially a pilgrim in her great humility and reverence, seeking what every artist must have-Love of work for the work itself. She approached everything with the same brilliant life force. Ann Harding was a remarkable actress, a wonderful person, a loving aunt. Thank you for keeping her spirit alive.